Cooking over the fire! Medieval cooking in the SCA

This page contains links that connect to sites over which neither the SCA or Wealdlake has any control.

One of my interests is cooking. This comes from an addiction to food - I cannot seem to live without it!  It is my preference to enjoy good food.  From this desire for good food and an interest in things medieval, I have begun studying "period" cooking.  This I have demonstrated in the past at the Michigan Challenge Balloonfest Medieval Village SCA Demonstration.

For years I have made soup using an old family recipe that has been passed down from each mother to their children for at least 5 generations in my family. It was passed on both sides of my family. I learned it from my mother and grandmothers and taught it to my children. It was written down as - chicken stock, carrots, celery, onion, eggs, flour, salt, milk. This list of ingredients is all I need to remember how to make it. The amount of each ingredient needed changes depending on how many people I will be serving. My largest pots fed over 50 people.

I learned to cook using a handful of this, a palm of that, a pinch of some herb, spice or ingredient. Documentation of Medieval recipes cooking and recipes most often resemble my family recipe.

This year (2008) at the Balloonfest medieval Village Demo, I made "Chicken Pot with Dumplings" This is the filling I use for Chicken Pot Pie. However, instead of a crust on the outside, there were the noodles or dumplings from the above chicken soup recipe added to fill you up with the carbs needed for a full day of beating people with sticks! This fed over 125 people. It is fun to cook over fires! My thanks to His Excellency Baron Kuntz for his help with the fires, as well as Cheryl and Aliyah for their assistance in prep.

One of the objectives of the SCA is to teach people about the Middle Ages. Many people do not believe that corn is "period." Let's define our terms. In Europe from the time of the Romans (circa 60 BC), corn was any grain that was ground by the Lords in their mills. The SCA covers from 600 AD to 1600 AD - and "Columbus sailed the ocean blue, the year was . . . " so, maize is late period.

So, at Balloonfest one year, I cooked maize aka corn on the cob in the husk over a fire, roasted it on a spit, and placed it in the coals.  I explained, "My Lord has brought this to camp for the enjoyment of the Baron and Baroness and all his guests.  I do not know how to cook it. It is not kernels as corn is, that I may boil it like oats and barley. It has this outer covering that I am guessing comes off to eat. But, is the yellow part eaten or is that scraped off so the inner part may be eaten? This will be an interesting dinner I am sure."

As Balloonfest was a public demonstration, I was given much advice by the people passing through.  Many seemed to have experienced and enjoyed this strange food.  Butter, a dash of salt and eating the yellow part seemed to be the best advice given. That did work well when we tried it later. The inner part was quite hard to eat and was not very tasty. Some of the visitors even spoke of something called "corn flakes?"

Another year I made "Stone Soup." This allowed me to tell many the story of stone soup. You are not familiar with it? Well, have a seat...
There was a herald traveling by foot through many a village carrying an important message. As he would pass through a village, he would respond to the attitude of the villains. (Villains in the Middle Ages are simply the term for the residents of a village.) When they came out to greet him and offer sustenance, he would thank them courteously and enjoy their hospitality. If they hid in their cottages, he would take the small pack of wood he carried and build a small fire. Then, under the watchful eyes of the villains, he would take his pot and put in some water from the village well. This he would put over the fire. Into this he would very carefully place a small stone. After tending the fire for a short period, he would taste the soup. With great relish he would taste it. Then, one of the villains would come out and ask him what he was doing. He would explain, "I am making Stone Soup." They would inquire as to how it was coming, and he would state, "The soup is coming along very well, however a few turnips would add to the flavor. I am sorry I do not have any to add to the flavor, but I am happy to share with you what I have." The villain would respond generally with providing a turnip or two for the pot. As the first villain came safely forth, the other villains would come out to inquire, and would soon add other ingredients such as beans, barley, oats, carrots, a bone, meat, etc. to the pot. Often, all in the village would soon come forth, tables and benches would be set up, then bread, pies, puddings, as well as other wonderful foods and many beverages would fill the tables to go with the 'Stone Soup'. A feast would begin with the local priest providing a blessing on all. Often a villain or the priest would offer the herald a place to sleep for the night. The herald would accept. After the feast, the pot would be cleaned, as well as the stone. The stone would be carefully wrapped up and placed in the heralds pouch. After a good nights sleep he would continue his travels, picking up wood from the forest path as he walked, replenishing his stack for the next pot of stone soup.

At many an event, you see people eating cheese and bread. Bread we know has been around since Biblical times, as it is referenced in many places in the Bible. The question came up - are cheeses in period. And if they are in period, which ones?

Preliminary research has shown that these cheeses are indeed period in the areas covered by the SCA. Click on cheese name for more information.

Should you believe "period" cooking must not be tasty to the modern palate, then I challenge you to go to the A Boke of Gode Cookery website and give one of the recipes a try.

As it says on the Boke of Gode Cookery opening web page:

God may send a man good meate, but the devyll sende an evyll cooke. 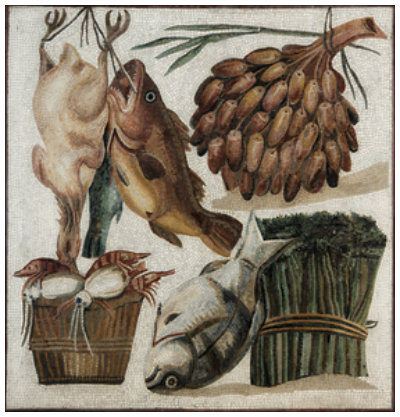 Food Mosaic - a Taste of Rome

Medieval cooking was not, as has been so easily assumed, a dubious practice that produced inedible dishes filled with strange spices and dangerous ingredients. Medieval cooks used many of the same type of foodstuffs that are in use today, in addition to forms of food preparation familiar to any of us. The dishes and recipes they prepared were neither inedible nor dangerous, but extremely delicious and nourishing products that employed the finest meats, grains, fruits, and vegetables medieval society was capable of developing. Then as now, mankind knew what tasted good and the sauces, stews, pies, roasts, and soups that satisfied the 14th century family are just as wholesome and enjoyable today.


Another good site is the blog Give It Forth.  This has recipes as well, with background information, recipes form different cookbooks with an 'interpreted recipe'. Includes feasts - the lists of dishes served.

Go to the web pages and ENJOY!!

or try the Gode Cookery ring by clicking the image below

or another goode webring