This page contains links that connect to sites over which neither the SCA or The Canton of WealdLake has any control.

Áindle & Aliyah
This is the site of the Baron and Baroness of North Woods. It includes information on the new awards of the Barony.
SCAKids.org
This the website set up to provide information for youth activities by The Honorable Lady SaehildR barngodR (Lady Say-hil-der) (formerly Lady Seadhli), currently the Dean of the Midrealm Page School.
It is also the site for the information for the WealdLake event - It Takes My Child To RAZE A Village.
The Kingdom of the Middle (Midrealm)
This is the website for the Middle Kingdom of the Society for Creative Anachronism, Inc. (SCA) of which the Canton of WealdLake is a member.
Midrealm, being the third oldest kingdom (of seventeen) in the SCA and properly known as the Middle Kingdom, consists of Ohio, Kentucky, Indiana, Michigan, Illinois and a nip of Iowa, Wisconsin, Minnesota, North and South Dakota, Manitoba, and a bit of Ontario.

Barony of North Woods
This is the link for the recognized web site for Barony of North Woods of the Society for Creative Anachronism, Inc. of which the Canton of Wealdlake is a member. This is the sponsoring organization of the Canton. Cantons are sponsored by Baronies, Shires by the Kingdom. These are the two ways of groups joining the national organization at a local level.

The Society for Creative Anachronism
This is the link to the official website for The Society for Creative Anachronism, Inc (SCA). The SCA is an international organization dedicated to researching and re-creating pre-17th-century European history. All persons interested in such study are invited to use this site to obtain information about the SCA. This is the national organization of which the Canton of Wealdlake is a member.

The Society for Creative Anachronism Newcomers Portal
A web site showing in picture and text what the SCA is about. A good overview of the SCA and its many facets. Provides a lot of useful information about the SCA.

SCA Heraldry Information
As the webminister is also a herald, this is a site he thinks everyone should visit. This is the SCA College of Arms on the Web. As it says on the home page "Welcome to the website of the SCA College of Arms! Heralds in the Society for Creative Anachronism have many jobs. We are fondly called book heralds, helping to research period naming and armorial practices for the registration of names and armory for the populace. We are voice heralds, calling announcements, proclaiming who is fighting upon the field, and acting as the voice of nobility in court. We are protocol heralds, recording awards and honors bestowed, drafting ceremonies, and determining precedence and other period legal niceties in all sorts of situations. We also work closely with our good friends in the College of Scribes, whose art and artistry with pen and brush make what we do beautiful. Anyone can be a herald. You can be a herald!
Office of the Minister of Arts & Sciences
This is the main page for Midrealm Arts and Sciences. It provides links to rules, criteria as well as scheduled locations for the regional and Kingdom faires.
House IronWolf
This is one of the many households of the SCA. Many of the members of the the canton of WealdLake belong to this household, which is led by the Knight: Baron Sir Osric Eisenwulf, member and protector of the Canton.
The Middle Kingdom Equestrian College
Quote from the homepage of the website: "The Purpose of the Middle Kingdom Equestrian College is the promotion of both participation in, and study of, equestrian activities and subjects in the Society for Creative Anachronism (SCA), particularly the historical role and utilization of horses and their ilk in the ancient and medieval worlds. While based in the Middle Kingdom, anyone of any realm is welcome to participate in its activities, should they share our desire to study and develop skill in the areas of horsemanship, mounted martial prowess, equine studies, and/or equestrian related arts and sciences, and are willing to abide by our kingdom and college laws." 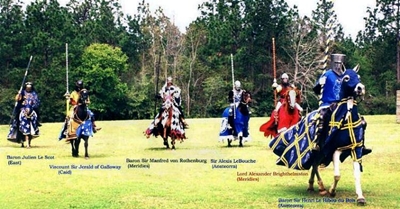 Deputy Earl Marshal for Hound Coursing
Quote from the homepage of the website: " The mission of the Hound Coursing Program for the Middle Kingdom is to provide a safe and fun environment whereby dogs and their handlers can participate in period coursing activities.

Other links of interest

Below are links to those sites the webmaster has found of interest in relation to SCA activities or have been recommended - such as tents or pavilions, swords, garb, etc.

WealdLake takes no responsibility for the content of any of these other sites.

(Thank you Sarah and Mr Bill for)

A Boke of Gode Cookery

The Labyrinth: A World Wide Web Server for Medieval Studies

Book of Hours in Latin and English